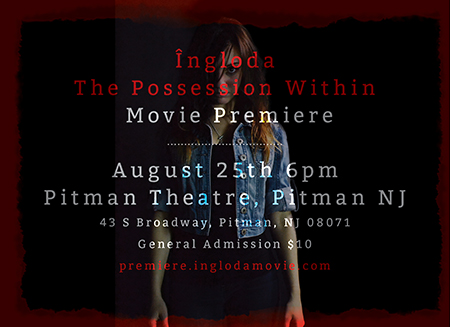 Sicklerville, NJ, JULY 10, 2013:  On-Ride Entertainment, LLC. announces and formally invites the general public to the Exclusive Premiere and 1st Screening of Îngloda: The Possession Within. The public event will be held on Sunday August 25th, 2013 at 6:00 PM at the Broadway Theatre in Pitman, NJ. Seating is limited at the event. Online tickets go on sale on Wednesday, July 10, 2013 at 9:00 AM EST; .

Beginning today, On-Ride Entertainment, LLC. would also like to announce that post production has ended on its first feature film, Îngloda: The Possession Within. Principal photography began on January 12, 2013 and ended early March 2013. Post-production ended in mid-June 2013. Fans will also notice that a sub-title has been added to the name to prepare for the release of the film.